Ok, here’s the deal. I’ll throw a rope down the cliff where I left you dangling a few weeks ago if you scroll down and click on the grey button that reads ‘I want to feel the fever too’. It’s just below the little blue Twitter symbol where @WarksWedding is in red*. For you, the reader, that simply means you’ll receive an email every time I add a new post. For me, the amateur blogger, it means I’ll have a longer list of registered followers than I have right now. To date, although awarwickshirewedding.com has attracted a staggering 805 hits, only 8 people have actually signed up as active followers. Now, I should perhaps explain that my motivation for wanting to boost my list of followers is not about vanity, it’s about a want to establish my blogging credentials. You never know, being able to demonstrate that I can use this new fangled social media might help me get a job when I am made redundant next year.

So, based on the assumption that you’re now all bona fida followers of awarwickshirewedding.com, I ‘ll keep my side of the bargain and reveal the reason why we changed our minds about getting married at Hampton Lucy’s cathedralesque St Peter’s ad Vincula (yes, I know that ‘cathedralesque isn’t a ‘proper’ word but I think it should be so I am going to ignore the spell checker and carry on regardless, boldly blogging where no blogger has blogged before).**

To recap. John and I had secured the agreement of the Vicar, Rev’d David Jessett, to our marrying at St Peter’s and, believing that it was all just meant to be, we went along to the church summer fete. So there we were, sitting in the garden, sipping tea and eating cake, chatting to the locals when the bombshell landed. Reader, brace yourself.

Way back in the midst of time, so the story goes, the then Vicar of St Peter’s had all but one of the bells removed from the bell tower because the sound of the bells being rung frightened the horses. I’ve never heard of that happening before so can only assume that those Hampton Lucy horses were of a particularly nervous disposition.  Now, in case you haven’t quite grasped the full implication of the bells being removed, let me spell it out to you: one bell renders that lovely ‘Ding-dong, ding-dong’ wedding day peel quite impossible. It means a wedding without bells. I nearly choked on my slice of Victoria sponge.

Of course, after the initial shock, I quickly pulled myself together and made a stoic effort to convince myself that wedding bells weren’t really very important at all. In fact, I reasoned, they would probably have been far too noisy. I was with the horses on that one. Conversation would have been drowned out by all that clanging. And you have to pay to have the bells rung. Much better not to have them at all. So, by adopting a mature and rational approach to the situation I more or less extinguished my initial, and ridiculously over-exaggerated , level of disappointment.

In the weeks that followed, however, I noticed a direct relationship between my efforts to convince myself that church bells were neither important nor desirable, with the number of ringing bells I kept on hearing.  And no, I wasn’t suffering from a bout of tinitus. It was church bells. Outside every church I passed, or so it seemed, there were brides and there were bells. And then there was the weekly torment of Wednesday night bell ringing practice at my local parish church, St Michael’s Boldmere, the sound of the bells growing more lovely with each passing week.

My efforts to accept the ‘bell-lessness ‘ of St Peter’s were further hampered when a very down-to-earth friend, whom I felt sure would administer a good dose of common sense to soothe my gnawing disappointment, stared at me with wide-eyed horror and spluttered, her voice high-pitched with incredulity, ‘a church wedding, without bells?’.

At that point I decided it was time to do that whole ‘thinking outside the box’ thing. And I came up with two possible solutions, one quirky, one technological: we could either procure the services of a group of hand-bell ringers or, alternatively hire a PA system and play a recording of church bells from an iPod.

MoH (Matron of Honour) was more ambitious, bringing a ‘blue-sky’ perspective to the problem. She suggested initiating a campaign to raise sufficient funds to have the bells replaced. Nice idea. I salute her ambition. But I think it would take more than a couple of cup cake sales to make enough dosh to have bells specially cast and fitted. And even if we managed to get celebrity backing (Dame Judy Dench seems to have some links with the parish) and were able to raise huge sums of money, I think it might be tricky to win round the Church Council – what on earth would they do about the horses currently living within earshot of the church? They may well have inherited an excitable nature from their four-legged forebears.

Now, at this juncture, you may well be wondering why we didn’t consider changing church. Good question. The answer lies, I think, in our lack of imagination. We were so bowled over by the majesty of St Peter’s that we found it quite impossible to believe that any other church in Warwickshire could possibly be its equal. It was only when Christine McBeath, the lady that organises parish weddings suggested that we might like All Saints Church at Sherbourne (which has a full set of bells) that we considered a change of venue and decided to take a drive to Sherbourne to see if she was right. She wasn’t. We didn’t like All Saints church. We absolutely loved it.

Set at the end of a quiet lane, nestled next to a meadow inhabited by lovely woolley sheep contentedly munching grass, All Saints presents a picture of arcadian delight. 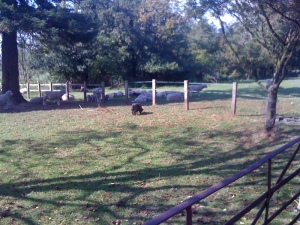 Fig 2. The meadow next to All Saints Church, Sherbourne

A winding path from the lych gate leads through the walled graveyard to the church doorway, the archway of which is adorned with intricately carved stonework depicting foliage and birds, a theme which continues inside the church where further stonework embellishes the clusters of marble pillars that line the aisle.

Fig 3. The decorative stonework around the arched doorway to All Saints

Every corner of the church seems to be singing the praises of nature: even the wooden pews and choir stalls are decorated with lovingly chiselled motifs of flowers and leaves, polished smooth and shiny by the patina of a thousand hands over the last 150 years. 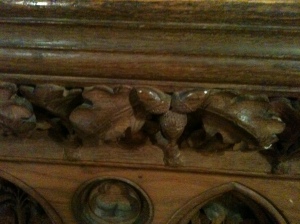 Admittedly, All Saints is smaller than St Peter’s and its relatively modest wooden roof does lack its neighbour’s soaring stone vaults. But the exquisite beauty of each tiny and perfectly executed detail found within the walls of All Saints easily renders it the aesthetic equal of its Hampton Lucy counterpart.

Fig 5. The lovely interior of All Saints

All Saints also has pretty impressive architectural antecedents. A Grade II listed building, built in 1862, it was designed by Sir George Gilbert Scott, the legendary Victorian architect who is perhaps best known for his neo-gothic masterpiece, The Midland Grand Hotel at St Pancras Station. Lest I fail to do justice to St Peter’s ad Vincula (which we still love) and offend the parishioners of Hampton Lucy, I should perhaps mention that Sir George was also responsible for the remodelling of their wonderful church too.

Given our love of architecture, as well as of nature, we immediately knew that All Saints was the perfect setting for our marriage and we were mightily relieved when both Rev Jessett and Mrs McBeath reacted positively to our request to change churches.

So, it was that on that golden afternoon in early September, my inner Bridezilla was, albeit temporarily, soothed into submission as I basked happily in the knowledge that ours would be a wedding accompanied by a peel of bells. Bask with me for a moment by listening to the audio clip below of the very same bells that will ring out on our wedding day*** before continuing to the final paragraph of this post where you will find that I have slipped in something unexpected . . .

The eagle eyed amongst you will have doubtless noticed that I have used the word ‘temporarily’ when describing the subduing of the said Bridezilla. This choice of wording is deliberate, designed to whet your appetite so that you will continue to follow awarwickshirewedding.com. For there is a postscript to this story; yet another unfolding of fate which made us wonder whether a church without bells might be preferable to what we feared might be the alternative scenario.

* Apologies to anyone who is colour-blind.

** This is one for all you Trekkies – I am trying to cater for all audiences here.

*** Thanks to Mr Palin for the provision of technical assistance.