Several posts ago I described Mrs Adams, KoTD (formerly known as Miss Rachel Goddard) as being my most stylish friend.  This assessment was not a throw-away comment.  Rather, it was made after over a decade of observation during which time I have never ever witnessed Rachel (now that we are all friends I think we can, for this post at least, assume a little informality) having a bad hair day or making any of the fashion faux pas that most of us commit once in a while.  No, Rachel is an unwavering model of sartorial elegance so I knew that her choice of wedding dress was bound to be pretty amazing.  Even so, I was still agog when she walked down the aisle wearing a dress which oozed glamour and sophistication to the max 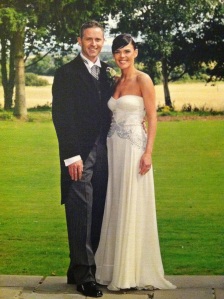 For those of you who are familiar with bridal couture, you’ll probably have immediately identified the cut and decorative details of Mrs Adams’ dress, Charlie, as emanating from the studio of the much feted designer Jenny Packham.  Dubbed as the Queen of Art Deco, Jenny Packham combines luxuriously fluid fabrics with beads and crystals to create gowns that are reminiscent of 1930s movie style glamour.

And the geometric design on the extensively beaded bodice of Rachel’s dress certainly showed a strong design influence from that era.  But there was something else about this dress which added to the wow factor and made it even more special.  Look closely at the decorative detail on the aforementioned bodice and you’ll see that what might first have appeared to be an abstract pattern is in fact two stylised long-beaked birds facing one another.  It was a lovely feature that influenced other aspects of the wedding: most notably the bird-themed wedding stationery and the decorative bird cages which adorned the tables at the evening wedding reception. 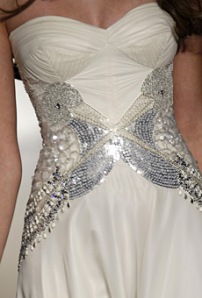 Although Rachel didn’t want anything to detract from her dress and decided against either a veil or tiara, she did want to wear something in her hair so she sought help from the Glasgow based jewellery and accessories designer Gioia Mia.  The result was a beautiful bespoke comb set with  crystals and rhinestones in a sunburst design which perfectly complimented the Art Deco feel of the dress.  To read about how Gioia and Rachel collaborated to create not only the comb but also necklaces and earings for Rachel’s two bridesmaids take a look at Gioia Mia’s blog spot.  While you’re there, why not have a look at some other examples of Gioia Mia’s work?  You might even be inspired to commission something for your own wedding. 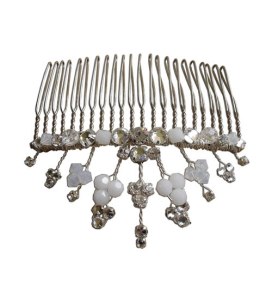 Recounting these details of Rachel’s wedding and looking at the photos again reminds me of an amusing incident which was triggered by my over-enthusiastic reaction when Rachel told me that she was using Laduree as one of her suppliers.  If you’ve got a moment, do take a look at their captivating website.  I challenge you not to click on all the adorable interactive elements.

Originating from Paris, but with several branches in London, Laduree is perhaps best known for producing delicate macaroons in a rainbow of colours and myriad of seasonal flavours which are as beautiful to behold as they are to savour.  And building on their reputation as macaroon market-leader, Laduree has created divine wedding macaroon pyramid cakes comprised of tapered towers of pale pink and green macaroons. So when Rachel, (albeit rather cagily) mentioned placing an order at Laduree, I assumed that she was referring to a Laduree wedding cake. It was an assumption that fired my creative spirit and I resolved to make Rachel and Laurence (Mr Adams) a special Laduree inspired wedding card. 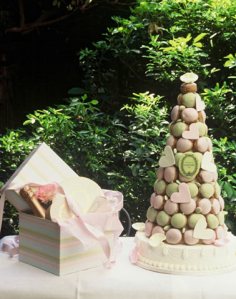 Now I freely confess to being the least artistic person you are ever likely to meet.  I can’t draw for toffee.  But I am a dab hand with a pair of scissors and a glue stick.  So I enthusiastically set to work.  Having found a card which depicted a bride and groom cutting a wedding cake, I cut out the Happy Couple, stuck them onto a pink card and then printed out a photo of a Laduree macaroon pyramid and inserted it in place of the original wedding cake drawing.  I was well pleased with my efforts, especially when I managed to procure a length of pale green Laduree ribbon from a very nice assistant in the Burlington Arcade Laduree shop which I then used to further decorate the card. It was, if you’ll forgive the pun, the icing on the cake.

Fig.5. A Laduree inspired card made, with love, by Mrs Moore-to-Be and a glue stick.

H2B congratulated me on my efforts but sounded a word of caution by asking whether I was absolutely sure that Rachel and Laurence had ordered a Laduree cake.  I swiftly brushed his concerns aside.  Of course I was sure!  Admittedly we hadn’t specifically spoken about a cake but that was doubtless because Rachel wanted it to be a surprise.  Female intuition assured me that I had no worries on that score.  But you know, this whole female intuition thing can be over-rated.  In fact, sometimes it’s just plain wrong, as I was to discover when I arrived at the wedding reception.  I walked into the marquee, clutching the envelope and excitedly asked Rachel about the cake expecting her to wax lyrical about their Laduree macaroon wedding cake.  And indeed she did wax lyrical about their wedding cake.  Their carrot wedding cake.  The macaroons, in pale green to match the bridesmaids dresses, had been given to guests as individual wedding favours.

The smile on my face froze as I handed over the card.  It was too late to retrieve it and although I know Rachel really liked it,  I did wish I’d checked my facts and not jumped to such a hasty conclusion.  It was a case of that Fizzy Pop Girl again.  She’s so much nicer than Bridezilla but sometimes her enthusiasm needs reigning in a little.  Now that’s a job with a lifelong tenure.  And I know just the man for the job.

Returning to the macaroons,it occurs to me that when Rachel sourced wedding favours that echoed her wedding colour palette, she might have been at the forefront of a whole new wedding trend: wedding colour coordinated food.  And I find myself wondering whether the entire wedding breakfast could be colour coordinated in this way. Perhaps you’re one step ahead me and have already created such a menu.  Or perhaps Rachel’s macroons have given you food for thought and you’re mulling over the possibilities and coming up with all sorts of interesting colourful culinary combinations. If so, I’d love to hear from you via A Warwickshire Wedding’s brand new Facebook page.  So if you’ve got a minute do come and see me – I’ll be eagerly awaiting your foodie thoughts.

2 thoughts on “It was Jenny P for Rachel G!”