Now that I’ve got your attention, I have a confession to make:  I’ve exercised just the tiniest bit of artistic licence when referring to the day I saw HRH and met a Prince. For whilst, like the Pussy Cat,  I did indeed go to London to see the Queen, I was not in her physical presence at any point during that day. What I actually saw was a collection of photographs of her taken by the legendary Sir Cecil Beaton which were on display at the V&A.  It was really interesting to observe the way in which Beaton’s style evolved over the decades by comparing his early romantic portraits of the young princess, sitting amidst a softly lit floral backdrop, with his later almost silhouette-like images which depicted a strong and mature Monarch.  Although the exhibition has now closed, readers who are interested can read more by accessing the relevant page of the V&A site by clicking here.

The second part of my trip to London was even more thrilling than the first because that was when I met the said Prince.  Ok, so the Prince in question was prefaced by ‘Mr’ rather than by ‘HRH’ but even so I was very, very excited to meet him.  You see, the Prince I’m talking about is none other than Mr Andrew Prince, creator and purveyor of the finest costume jewellery.  Now whilst you may not be familiar with his name, fans of a certain period drama will be familiar with his work because he is none other than the man behind the exquisite tiaras worn by the characters in Downton Abbey.

Of course, the Downtown Abbey commission is a relatively recent development which Mr Prince doubtless won as a result of having built up an enviable reputation as a designer and craftsman of beautiful necklaces, earrings, brooches and chokers as well, of course, as his trademark tiaras.  This is a man whose destiny seems to have been determined in his formative years. The biographical details on his website include an amusing story of him having swallowed one of his mother’s pearl earrings at the tender of age of three.  For some children, such a traumatic event would doubtless have infused jewellery with negative associations forever after.  Not so the young Master Prince.  His passion, if not ignited by this unfortunate incident, was certainly fuelled and from his earliest years he began to make little pieces of jewellery from whatever he could lay his diminutive hands upon.   Apparently, his first piece was a ring made from copper wire for his grandmother which turned her finger green and gave her a rash, whilst another early piece was a necklace made from beads extracted from his mother’s wedding dress. Mrs Prince was, understandably, not amused.

Undeterred, the young Mr Prince continued to hone his skills and went on to train under Antiques Roadshow expert, Ian Harris of N Bloom and Son and, later, to work with the contemporary jeweller Elizabeth Gage.  You might think that exposure to top-notch diamonds and other gems of a similarly high quality would have hardened Mr Prince’s heart towards costume jewellery.  Nothing could, however, be further from the truth.  For Mr Prince realised that, when placed in well designed settings,  materials such as Swarovski crystal and Signity zirconia, could make for beautiful pieces of jewellery, every bit as head-turning and eye-catching as the real thing and indeed far less stressful.  I love the comment on his website when he shrewdly says that if a piece needs to be locked up “it’s not a jewel, it’s a worry.  There’s real truth in that statement, not to mention business potential as has been testified by the success of Andrew Prince costume jewellery.

It was Andrew Prince’s range of bridal tiaras that I first stumbled upon when I saw them advertised in a bridal magazine.  Although I was immediately captivated and subsequently swooned over the gorgeous images on his website, I wasn’t sure that a tiara was for me.  My dress seemed too soft and floaty for something so intrinsically regal. Besides, I’d already bought some delicate white hydrangea petal hair grips with which to adorn my updo.  Nevertheless, after a telephone conversation with Mr Prince, who is exceptionally charming and personable, I decided to visit his showroom which is based at Richard Ogden’s Fine Antique Jewellery in London’s Burlington Arcade just, you understand, to have a look at the range of his work*.

For those, like Mrs Moore-to-be who lack retail self-discipline, ‘just looking’ is a dangerous activity and ‘window shopping’, a contradiction in terms.  As H2B and I descended the stairs to Mr Prince’s sparkling emporium, I felt like the little girl who used to be full of wonder at opening her mother’s jewellery box. Bedazzled by the beautiful array of twinkling objects that surrounded me, I could barely contain my excitement when Mr Prince invited me to try on a few of his creations.  This was big girl dressing up!  It was, I can assure you, just as much fun as little girl dressing up.  And when he placed  a tiara on my head, I could barely stifle a gasp of delight.  As I looked at my reflection in the mirror, I didn’t see a forty-something woman dressed casually with slightly bedraggled hair and lipstick in need of refreshing, I saw a Princess, graceful, elegant and poised.  Images of Audrey Hepburn in Roman Holiday** flashed through my mind and from that moment I was well and truly hooked. Thoughts of my hydrangea flower hairpins, lovely though they are, just melted away and my heart was set on some form of tiara. 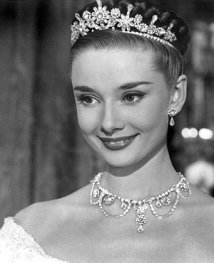 I knew that Mr Prince, as well as selling tiaras from his existing collection, also makes bespoke pieces and in so doing places great emphasis upon “matching the piece to the person”.  So we sat down and together we designed a hairpiece that would compliment both my dress and my jewellery.  Stylistically sitting somewhere between vintage chic and Russian Imperial, the result is a slender brown velvet band decorated with series of graduated flowers and leaves that arch from one side of my head to the other.  Standing neither too proud, nor lying too flat, they sparkle in my hair like a garland sprinkled with moonlit dew, making me feel like the Queen of the Fairies herself.

Fig.6. Eat your heart out Titania!

Such is my delight with my fairy diadem that I have even taken to wearing it around the house.  Indeed, for those amongst you who find the daily round of housework less than satisfying, I highly recommend wearing a tiara, or something similar, to help infuse the daily round of household chores with a little magic.  A word of warning though: do remember to remove it when you answer the door or go out shopping otherwise people might think you less of a Titania and more of a Twit.

* Readers who are familiar with A Warwickshire Wedding may recall a similar trip to London last November when I went designer wedding dress shopping.  To find out what happened on that occasion take a look at The day Mrs Adams got the letters KoTD after her name.

** Although this has absolutely nothing to do with tiaras, now seems like a good moment to share with you some details of my hen ‘do’: My marvellous MoH has arranged for a private screening of Roman Holiday at The Electric Cinema in Birmingham.  The Electric is the oldest working cinema in the UK and I’m so very excited at the prospect of seeing one of my favourite films surrounded by some of my favourite people.  And because it’s my party and I can wear what I want to, I have sourced a wonderful Mad Men style petticoat from Swingtime Collection to wear beneath my 50s style Karen Millen dress.  I feel like a hybrid of Betty Draper, a lampshade and one of those dolls with a crocheted skirt that conceals a toilet roll!