By no stretch of the imagination could our romance be described as being of the whirlwind type. It was more like a gentle breeze which took time to gather force and rachet-up the emotional Beaufort scale. Indeed, in those early days I found myself wondering whether the ‘needle in haystack’ feeling I’d experienced on first meeting John had been little more than a figment of my over-active imagination. For even in my most optimistic moments there was little real evidence of any mutual attraction. Nevertheless, I was determined to find some way of making John notice me and, because he is an IT professional, I hit upon the idea of asking him to help me sort out my numerous computer problems. This damsel in digital distress routine worked a treat and resulted in us spending several Saturday afternoons together. It was on one such occasion, when we were talking about music, that John introduced me to piece called O Fortunato Giorno. He explained that it had been composed during the sixteenth century by an Italian called Cristofano Malvezzi as part of the lavish celebrations organised to mark the Florentine marriage of French princess, Christine de Lorraine, to the Grand Duke Ferdinando I de’ Medici.

To be honest, I didn’t really expect to like it very much. At that stage my radio was permanently tuned to Radio One and classical music was way off my radar. From John’s description, O Fortunato Giorno sounded rather too highbrow for my taste so when he handed me his iPod to listen to the track, I braced myself to think of some sort of polite response. I was, however, in for a big surprise because I was genuinely blown away by what I heard. The rich, resplendent voices, gradually building up to the most glorious soaring choral crescendo, were absolutely breathtaking and from that moment onwards I was hooked, downloading and playing the track numerous times. But the biggest surprise was not the glorious harmonies of O Fortunato Giorno, but rather the thought that just popped into my head, seemingly from nowhere, when l first listened to it. For I distinctly remember wishing that it could be my musical accompaniment when I walked down the aisle to marry John. Thank goodness that he’s not telepathic for if he’d read that particular thought, I think he’d have beat a hasty retreat from my flat, never to return again.  John only has vague memories of that afternoon and reckons that his thoughts were a little more prosaic than mine, being more along the lines of wishing that I would invest in some Apple kit so that he could spend his Saturday afternoons in the pub with his mates rather than messing around with technology long past its use-by date in some quirky girl’s flat.

Fast forward to the start of our wedding planning in 2011 and my wish was on the verge of being granted. During the intervening years I had come to realise the importance of music to John. It is as if he hears it differently from me. When I listen to a piece of music, I enjoy the overall effect. John’s appreciation, however, lies in breaking down all the disparate parts, identifying which instruments have been used and understanding how everything fits together to comprise a harmonious whole. To use a parallel with art, it is as if I am looking at an impressionist painting from a distance, whereas John gets up close to examine each individual brushstroke on the canvas, assess the type of paint used, the quality of the brushes and the techniques employed.

It was therefore clear that if our marriage celebrations were to reflect us and our passions and interests, we needed to find both the right music and the right choir to deliver it. Clueless of where such a choir might be found, I did a quick Google search one morning and found just the ticket: The Wedding Music Company. From my very first conversation with the man behind the company, David Guest, I knew that I was dealing not only with a consummate professional but also with a thoroughly decent chap who didn’t pull any punches or pretend that hiring singers capable of performing the sort of music we wanted was going to be a cheap undertaking. So my heart did, I must confess, sink when David gave me an approximate cost. That said, when he explained that we would need to hire eight singers and an organist, as well as himself to conduct, for the best part of an entire day, I realised that his quote represented extremely good value for money. Nevertheless, good value or not, it would have tipped our wedding budget balance in the wrong direction so, in an uncharacteristically valiant effort to exercise a modicum of financial self -control, I thanked David but told him that I didn’t think it would be practical to proceed. At this point he gave me an excellent bit of advice. He explained that the complexity of O Fortunato Giorno was such that it would be folly to try to find a cheaper but less experienced choir to sing it, and that a better course of action would be to hire a good amplification system and use it to play the track from an iPod. This suggestion really did seem like the best way forward and that’s exactly what we would have done had David not mentioned a forthcoming opportunity to hear the singers with whom he worked in action at St Paul’s Cathedral some weeks later. It was just too good a chance to miss and although I told myself, and indeed everyone else, that we were just going for fun, deep in my heart I knew that I was kidding myself. And sure enough, when the final note of the choir faded into silence as we sat in St Pauls, the iPod idea disappeared into obscurity, and we found ourselves approaching David to ask him to reserve 6 October 2012 for A Warwickshire Wedding.

It wasn’t until the following summer when we met up with David at his Greenwich-based offices that I realised we hadn’t just found someone to conduct a choir to sing at our wedding, we’d engaged a Musical Director who was able to guide us through every aspect of our ceremony’s musical repertoire. By then, in addition to O Fortunato Giorno, we’d also settled on Eric Whitacre’s wonderful choral piece, This Marriage, to be sung during the prayers, and had agreed that Praise My Soul The King of Heaven would make for a stirring opening hymn, but we weren’t too sure about the rest of the music. We discussed the options with David over a bottle of wine and settled on a couple of pieces by contemporary British composer John Rutter to be sung during the signing of the Register called This is the Day (of Royal Wedding fame) and the less known, but very lovely, My True Love Hath My Heart and I Have His. For the Recessional, we agreed on two pieces by Purcell: They Shall Be As Happy from The Fairy Queen followed by Trumpet Tune in D, and for the additional hymns, David introduced us to We Pledge to One Another by Jill Jenkins and Lord Bestow Your Loving Blessing by Colin Baker. Both of these had the advantage of being sung to very familiar tunes: the first being Jupiter from Holst’s Planet Suite and the second being Bread of Heaven, which we hoped would encourage our guests to sing with gusto – which, I can confirm, they did.

When we left Greenwich on that rainy day in June neither of us were in any doubt at all that we had found the right man for the job, and our confidence was not misplaced. On The Big Day, David and his choir were magnificent. They didn’t just deliver a flawless rendition of the music we had chosen, they were an integral part of the service itself, participating as much as performing. It was as if the rise and fall of their voices both elevated that sense of exuberant celebration and deepened the gravity of the occasion. Our guests were enraptured. Some described feeling as if they were in a swoon, whilst others said they were near to tears simply because it was so beautiful. Even those who had been aghast at the prospect of our perceived profligacy in hiring a professional choir, agreed that it was money very well spent. We would go a step further and assert that, for us, it was money best spent.

As an aside, this seems a good place to mention that although A Warwickshire Wedding was themed almost exclusively around our P&J monogram, we did make an exception when it came to the tables at the wedding breakfast, naming each one after the composers whose musical work featured during our wedding service. Piccolo Press printed four cards bearing the name Malvezzi, Whitacre, Rutter or Purcell, each of which we placed on one of the four long Adam Hall tables in card holders made from gold coloured wire in the shape of a treble cleft by Turquoise Weddings. We have since framed all of the cards in a long, four aperture frame and they now serve as a lovely reminder of both our wedding music and our wedding breakfast. 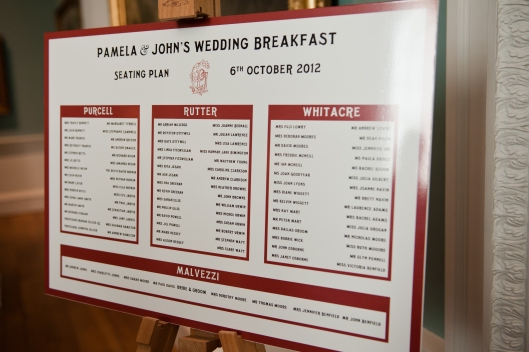 So there you have it. Thanks to David Guest and The Wedding Music Company, my wish was granted and I walked down the aisle to the glorious stains of O Fortunato Giorno. And, just in case you’re wondering, John’s wish also came true, for not long after we started dating and he got what his brother jokingly referred to as his ‘iPam’, I ditched my PC in favour of a brand new iMac and, I’m happy to say, that neither of us has ever looked back.